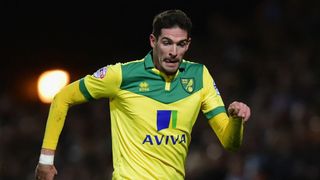 Norwich City striker Kyle Lafferty has been charged by the Football Association over an alleged betting breach.

The Northern Ireland international, 28, is accused of flouting FA Rule E8 on February 20 and has been charged with "misconduct in relation to betting".

An FA statement read: "It is alleged that on 20 February 2016, the Norwich City forward placed a bet on the result, progress, conduct or any other aspect of, or occurrence in, a football match or competition in breach of FA Rule E8.

"Lafferty has until August 5 to respond to the charge."

Lafferty spent time on loan at Birmingham City last season having struggled to break into the first-team picture at Carrow Road.

England winger Andros Townsend was suspended for four months - three of those suspended - and fined £18,000 for breaching betting regulations in 2013.

Former Manchester City defender Martin Demichelis was fined £22,000 and warned in May of this year after he admitted breaking the rules.