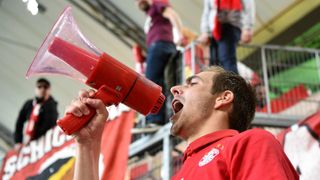 Philipp Lahm should be named Footballer of the Year before retiring as recognition for his impressive career, according to former Bayern Munich coach Jupp Heynckes and incumbent assistant Hermann Gerland.

Captain Lahm has won 21 trophies in a glittering Bayern career, including eight Bundesliga titles and the Champions League as part of the 2012-13 treble-winning side.

Heynckes was coach of the Bavarian giants in that historic campaign and believes the 33-year-old, who captained Germany to World Cup glory in 2014, deserves selection by journalists for the individual award.

"Philipp is one of the most extraordinary players in German football," Heynckes said in an interview with SID.

"I would hope, and he truly deserves it, that he is Germany's Footballer of the Year to end his great career."

Gerland, who coached Lahm as a reserve between 2001 and 2003, organised the full-back's two-year loan to Stuttgart and is now an assistant under Carlo Ancelotti, is of a similar opinion.

He told SID: "Since experiencing the Bundesliga up close in the 1970s, I have never seen such a player.

"That's why I can't get it into my head that Philipp has never been voted Footballer of the Year by journalists.

"He does not play spectacularly and he does not score many goals, but he has been playing at an incredible level since 2001."

"There aren't many players like . He's exceptional."Read the full interview with Hermann Gerland: May 16, 2017

Lahm will play his final professional game when champions Bayern entertain Freiburg at the Allianz Arena on Saturday.

He is confident Ancelotti will handle the occasion appropriately and acknowledged he will miss the regular contact with his team-mates when he hangs up his boots.

"The good thing is I have a very experienced coach who knows how to deal with farewell," said Lahm at a news conference. "I am sure he will make the right decision. We will see what it is.

"I think when I am gone for some time I will miss some things. But I still have one more week to go and after that it is great that you have less obligations.

"At some point I am sure there will be a moment in the future where I am going to miss some things, but I will not miss travelling because I like to be at home with my family.

"I came here in 1995 and I still feel very comfortable here so this I will miss for sure at some point."