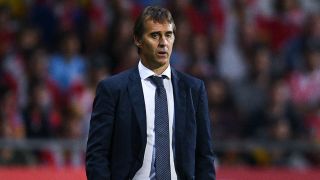 Following a deal between Spain's top flight and multinational media, sports and entertainment group Relevent, LaLiga this week submitted a proposal for the Catalan clubs to face each other at the Hard Rock Stadium in January.

The fixture is a regular-season game slated as Girona's home match. The Royal Spanish Football Federation (RFEF) must make a final ruling.

Like RFEF president Luis Rubiales, Lopetegui has spoken out against plans for LaLiga matches to take place in the United States and, with Barca likely to receive far more support on neutral ground, he told a news conference the battle for the title should be "equal".

"I've talked about this before. I'm not in favour of it," said the former Spain boss ahead of Saturday's trip to Athletic Bilbao.

"I think we should all play in the same conditions, in the same stadiums. That makes the tournament equal."

Opposite number Ernesto Valverde was critical of such outcry regarding a state of affairs that remain hypothetical at this point.

"It's a game being played in January. What people have been talking about in the last few weeks has been ridiculous," the Barcelona head coach told reporters on the eve of his team's match at Real Sociedad.

"How much more are people going to talk about this game? It might be a completely different game that's played [in America], if any at all.

"For me it's something in the distant future. I think it's nice we're all talking about this but let's not make too big a thing of it.

"I think it's something that's still up in the air. It's not certain we're going to play this game at all so let's wait until things are decided."

Long-serving Barcelona midfielder Sergio Busquets has come out in opposition to the plans and Valverde confirmed he had discussed the matter with his squad.

"We've spoken about this with the players but I insist it's still a long way off," he added. "We'll have to wait and see how things end up because I think there's still a lot more to be said about this."