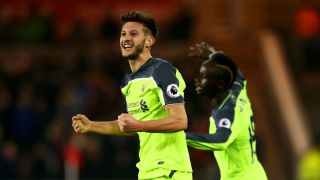 Jurgen Klopp raised eyebrows by dropping Loris Karius in favour of Simon Mignolet pre-match, but a polished performance at the Riverside Stadium moved the Premier League's top scorers back up to second in the table.

Lallana scored either side of setting up Divock Origi's fifth goal in as many games as Liverpool shook off defensive horror-shows against Bournemouth and West Ham to get their title tilt back on track.

"It was a difficult start, we knew this was going to be a tough place to come.

"I thought we came out second half brilliantly and got goals at good times. We stuck at it and we're thoroughly pleased with the result in the end."

Mignolet was an assured presence in goal, keeping Liverpool first level and then ahead in an even first half.

Lallana added: "We've dropped a couple of points, especially in the Bournemouth game when we were 3-1 up, so it was even more important tonight when two, three up to stay concentrated and the clean sheet's good for the team."