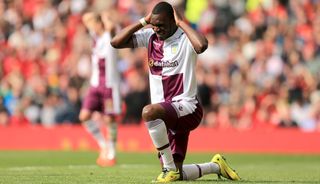 Wayne Rooney's double before half-time cancelled out Ashley Westwood's early free-kick as United responded well to a week that saw them thrashed 3-0 by Manchester City.

However, Benteke passed up two gilt-edged chances to get Villa back on level terms just after the interval, and those misses would come back to haunt the Belgian as Juan Mata netted his first goal for United to give them a two-goal cushion.

Javier Hernandez added gloss to the scoreline in stoppage time to consign Villa to their heaviest away defeat of the season.

But Lambert absolved his star striker of any culpability for the result, hailing Benteke's previous sterling service for the club instead.

The Scot said: "After the restart we had some fantastic chances and they fell to the big lad who's normally lethal from that distance.

"But I can't be too critical of Christian because he has scored some vital goals for us in the last 18 months and he'll continue to do so.

"He was in the position to score the goals, he might have had a penalty, and he'll come back stronger."