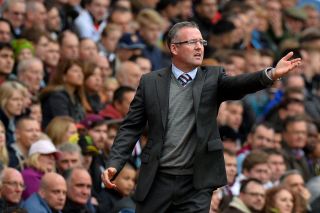 Villa were presented with the perfect opportunity to open the scoring in the eighth minute when Christian Benteke was tripped by Seamus Coleman in the area, but Howard pulled off an excellent save from the resulting penalty to put it over.

Benteke missed more chances in the first half, while Andreas Weimann also lost in his personal duel with the United States international, who would end the match with a clean sheet.

Romelu Lukaku and Leon Osman found the net for Everton in the final 22 minutes to leave Lambert to rue Howard's fine individual display.

"But you can't be too harsh on the lads because they have done it since I have been here. The penalty save is terrific. I have just seen it back.

"With the second chance, Christian does the right thing trying to go across the goalkeeper but he's made another great save.

"Then the third one with Andi (Weimann), the keeper has done really well again.

"The goalkeeper has had a really good game, but when you don't score when you're well on top?

"I thought we were well on top in the second half too but then we got caught. But I can't fault the lads for having a right good go.

"In the second half, we were in the ascendancy. I thought Gabby (Agbonlahor) should have scored to make it 1-1. He had a good chance."

Lambert also bemoaned the goals his side conceded, with both Lukaku and Osman afforded too much space on the edge of the area, as the duo scored very similar goals.

"The two goals were really poor," he added. "I thought we were on top in the second half. But these are big moments when you don't score. We had three fantastic chances.

"The goals will come. We are creating chances. That's the good thing. The lads will score.

"You can't be harsh on them because more times than not they will take their chances. I can't fault the lads for not giving it a go. We should have won that.

"I won't criticise them. They have given it everything they have got. On another day, they would have come in 3-0 up."