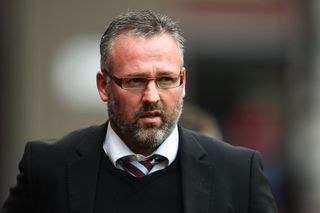 Lambert's men saw their strong start to the Premier League campaign grind to a halt as they were defeated comfortably by Arsene Wenger's men.

Three goals in just over three first-half minutes secured the points for Arsenal at Villa Park, Mesut Ozil and Danny Welbeck scoring before defender Aly Cissokho put through his own net.

But Lambert – who signed a new contract at Villa earlier in the week – refused to be critical of his players after a number of his squad dropped out due to a virus.

Defender Nathan Baker and Darren Bent both withdrew on the morning of Saturday's game, while Ashley Westwood experienced symptoms in the warm-up and forward Andi Weimann was sick during the half-time interval.

Goalkeeper Brad Guzan and midfielder Fabian Delph played the full game despite apparently struggling with the illness, but Lambert confirmed he will now close the training ground in a bid to stop it spreading further.

"We've had so much bad luck this week, even before the game," said Lambert.

"Westy [Westwood] was sick during the warm up and Andi [Weimann] was sick at half-time and Guzan's had it and Delph's had it.

"A lot of the staff are not feeling good, so you're not best prepared for that magnitude of the game, but I can't be critical of the start we've made.

"I think Fabian went into the Liverpool game not feeling the best and Guzan had it this week, but the other four lads were really bad.

"I don't feel 100 per cent and I think there's a few of them still in there not feeling that good so I'll probably shut the training ground for a day or so and see if we can eradicate it.

"Arsenal were clinical. To lose three goals is disappointing but I can't sit here and say I'm disappointed with the start.

"It was a tough game for us, it's a tough game when everybody is 100 per cent fit but what happened this morning and during the warm-up and at half-time, the lads were running on empty."