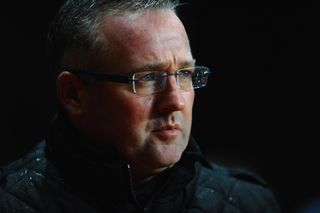 Four goals inside the opening 25 minutes made for an entertaining Premier League derby at Villa Park as West Brom went 2-0 up through a Chris Brunt wonderstrike and a Fabian Delph own-goal, but Andreas Weimann and Leandro Bacuna netted to haul the sides level.

Delph scored at the right end eight minutes before the break to give Villa the lead for the first time in the match, only for Youssouf Mulumbu to equalise in the 43rd minute.

Christian Benteke scored the winner with 26 minutes to go as he converted a penalty after being fouled by Diego Lugano and Lambert was left elated by his players' efforts.

"You never lose faith, that's for sure," he said. "There was only eight minutes gone and importantly we kept a level head and tried to get back into it, showing maturity.

"In doing that I think they grew up an awful lot, turning that (deficit) around especially against rivals. That's the magnitude of it. It was a massive performance from us.

"We were great after being 2-0 down after eight minutes or whatever it was. To be fair, the first goal from West Brom was a fabulous strike. We couldn't do anything about that, but the second was disappointing because we switched off at a free-kick and Fabian does his best to block the cross and then you're 2-0 down.

"Two-nil down in any game after eight minutes is tough, but in a derby game it doubles (in difficulty) because of the importance to the crowd, but the turnaround was fantastic.

"What a performance that was to turn it around in the way we did it, it was fantastic."

It had been suggested that Benteke went down easily when winning Villa's penalty, but Lambert is adamant the referee made the correct decision.

He added: "I think if you tug someone in the box then you're giving someone the chance to give the penalty.

"I think (referee) Mark (Clattenburg) had a really good view of it. If you're willing to take that little risk of pulling someone then you're risking giving away a penalty."