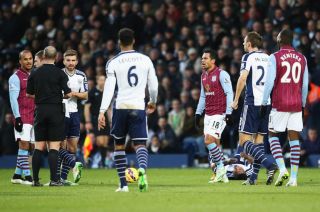 The midfielder, whose recall to the side represented Lambert's only change from the 2-1 win over Leicester City, saw red in the 22nd minute for a poorly timed challenge on Stephane Sessegnon.

While Lambert defended Richardson's intent, he did not criticise referee Mike Dean's decision to dismiss him.

"I can see why the ref sent Kieran off, but he's not a malicious footballer," the Scot said.

"I think with his second touch he's over-hit it. In the modern-day game if you raise your studs, you can see why the ref will give a card.

"His enthusiasm to win the ball back probably got him sent off."

Villa had started reasonably well against their Midlands rivals, but Richardson's ill-judged lunge turned the contest in the hosts' favour, leaving Lambert to reflect on what he felt was a good performance that went unrewarded.

He added: "I thought we were excellent, we started the game great. We looked really good.

"It was a big compliment for the team because for 70-odd minutes you wouldn't have known we had 10 men.

"I think there's a way to get beaten in football, so I'm disappointed to lose but not disappointed with the way we played."

Villa now sit 12th ahead of a home match against Manchester United next Saturday.