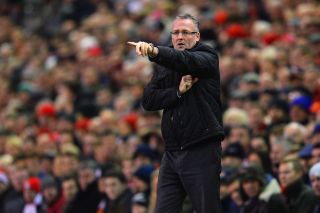 The visitors raced into a 2-0 lead thanks to first-half goals from Andreas Weimann and Christian Benteke, but they were unable to hold onto that advantage as Daniel Sturridge and Steven Gerrard earned the hosts a point.

Lambert was delighted with the display, but questioned the validity of the penalty decision that led to Liverpool's equaliser from Gerrard's spot-kick.

Brad Guzan was adjudged to have brought down Luis Suarez inside the area and referee Jon Moss awarded the penalty, but the Scot did not want that call to detract from Villa's achievement.

"My own view is he's definitely pulled his arms away, but their shooting down to their own end (the Kop), and it's an intimidating end.

"I thought we were outstanding, the whole game we were fantastic. There were some massive performances out there."

The point moves Villa in 10th place in the Premier League, with a derby clash against West Brom up next for Lambert's men.