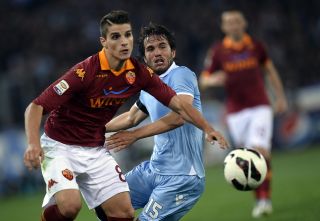 The Argentina international completed a move to White Hart Lane from Serie A side Roma on Friday, becoming the London club's seventh signing of the transfer window.

And he expects to adapt seamlessly to life in the Premier League thanks to Spurs' expansive style.

"I like the English style of football, it’s very offensive and attacking and that’s how I want to play. I have to adapt to playing in the Premier League as quickly as I can," he told Tottenham's official website.

"To maintain the winning streak we’re on, to integrate into the team as quickly as I can and for us to continue doing what we’re doing – winning games. I’m ready to give it my best."

Lamela also hailed the quality of his team-mates having seen them up close in training.

"I’ve only had one training session and I’ve met all the players, they all seem really nice guys and I think we have a great group of players this season," he continued.