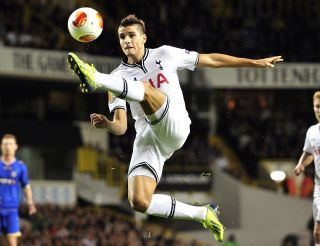 The 21-year-old made the switch to Andre Villas-Boas' side from Serie A leaders Roma  in August, in a reported £25.8million deal.

Lamela is currently on international duty with Argentina, and was used as a late substitute in Friday's 3-1 FIFA World Cup qualifying victory over Peru.

But he concedes he will quickly have to pick up the pace of England's top flight if he wants to be named in Alejandro Sabella's squad for the showpiece event in Brazil next year.

"It is not like the tactical game they play in Italy.

"I have talked a lot with my team-mates and I know I have to adapt quickly if I am to keep my place in the national team ahead of the World Cup."

Lamela has appeared seven times in all competitions for Tottenham this season.