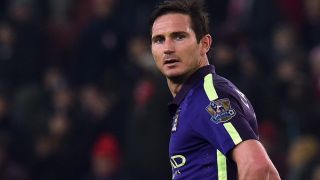 Lampard though never arrived in Australia and his transfer to the new Major League Soccer franchise has also been delayed, with Manuel Pellegrini's title holders controversially choosing to retain the veteran's services for the rest of the Premier League campaign.

“I wouldn’t have had a problem with it,” Lampard told Fox Sports when asked about a potential stint in Melbourne.

“I’ve never been to Australia so it would have been a great experience in itself there, but it just didn’t work out.

“This [going to Manchester City] came along slightly after and I took the opportunity to carry on playing in the Premier League at a really competitive level.

“I’m sure it might have been on the cards and the fact that David Villa went there [Melbourne] and played some games shows that there is a link and players maybe will be able to move, particularly when they need games like David and myself did at the time.

“I’m sure you enjoyed having [Villa] there and the quality he brought to the team and I know Damien Duff etc, so I certainly wouldn’t have had a problem to go to Melbourne, I would have enjoyed that challenge.”