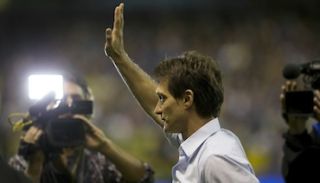 Lanus, Newell's only challengers, had 45 minutes in which to overturn a two-goal deficit against Estudiantes in the remaining 45 minutes of a match abandoned 10 days ago when a fan was killed in clashes with police.

Estudiantes, who had scored twice in the last nine minutes of the first half at the Estadio Unico in La Plata before the match was abandoned, hung on for a 2-0 victory.

Lanus had midfielder Guido Pizarro sent off in the final minute.

Going into this weekend's final round of matches, Newell's have 38 points, Lanus and River Plate 32 each.

A key to the team's success was the signing of Argentine 2006 and 2010 World Cup players Gabriel Heinze in defence and Maxi Rodriguez in midfield.

The result sparked celebrations in Rosario, where Newell's are based, and Resistencia, where they had a last-16 match in the Copa Argentina knockout competition later on Wednesday.