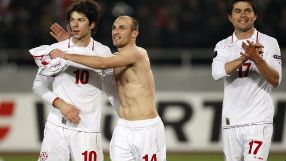 Goalkeeper Nukri Revishvili pulled off a string of fine saves to keep Croatia at bay before substitute Otar Martsvaladze stole in behind the defence in the 89th minute and laid the ball off to Kobiashvili who scored with his left foot.

Revishvili kept out long-range efforts from Mladen Petric and Tomislav Dujmovic either side of half-time but Georgia came out far livelier after the break, repeatedly hitting Croatia on the counter-attack.