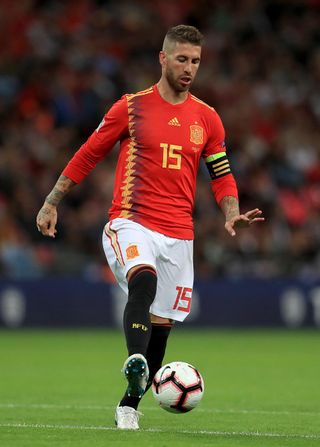 Spain head coach Robert Moreno was disappointed with his side’s performance as they were held to a 1-1 Euro 2020 Group F qualifying draw by Norway.

Josh King scored a stoppage-time penalty as Norway fought back after Saul Niguez had given the away side the lead two minutes after the break.

The result, combined with Sweden’s 4-0 victory over Malta, meant Spain’s wait to qualify for next summer’s finals continued as they hold a five-point lead at the top of the table.

Spain head to second-placed Sweden on Tuesday with a point needed to make it through and, in quotes reported by AS, Moreno said: “It wasn’t the game we wanted.

“I don’t have the feeling that they’ve caused us much danger beyond the penalty.

“When a team has nothing to lose these things can happen. It leaves a bad taste in the mouth because it was at the end of the game.

“The message now is that with a draw against Sweden we will qualify, and that’s what we are going try and do.”

On Ramos, Moreno added: “Ramos’ record is incredible, and still he has the desire to continue competing and wanting to keep winning titles.

“I want to congratulate him publicly and hopefully he can give us plenty of joy for a long time to come.”

Ramos admitted he was disappointed to only collect a point after breaking the national record but hopes Spain can learn and move on from their mistakes.

He said: “I have a bittersweet taste. I would have liked to beat the record with a victory.

“In the end, being a legend or not is marked by people. Being active, it is difficult to name someone with that word. I enjoy every day. The numbers are there. It will be seen in the future.

“I thank everyone for the support I have felt, from my family, colleagues, coaches…I have enjoyed a wonderful career with Spain. I will be eternally grateful. I still want to win with Spain.

“It was not one of the best games, but we added a point.

“From the results that are not so good, we must learn. Not everything has been positive. That helps us to grow as a team. You have to be optimistic. The last matches have been very good.”

King was delighted with his late equaliser leaving Norway still in contention four points further back in fourth.

King told www.fotball.no: “You have to have balls to take that penalty. It was lovely that it went in.

“The crowd helped us today. They gave us an extra push for the last 10 minutes. We put up a good fight in the first half and raised ourselves the last 15 to 20 minutes in the second half.

“We have everything to play for Romania. We need to focus on ourselves. There are three games left and we have to try to score nine points.”