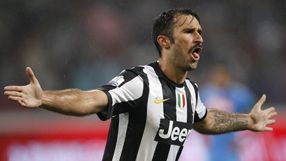 Vucinic pounced after good work down the right by Mauricio Isla in the 81st minute to leave goalkeeper Jesper Hansen helpless with a clinical finish.

Nordsjaelland had gone ahead in the 50th minute after forward Mikkel Beckmann curled a free-kick over the wall and into the net from 20 metres.

Juve turned the heat on the Danish underdogs after the goal and Sebastian Giovinco several times went close to an equaliser only to be thwarted by Hansen.

Playmaker Andrea Pirlo tried to emulate Beckmann's goal in the 68th minute but Hansen made another excellent stop from his free-kick.

Hansen had to be at his best again six minutes later to turn aside a good long-range effort from Isla.

Twice former European champions Juventus stay third in Group E with three points from three games while Nordsjaelland are bottom on one point.

Shakhtar Donetsk lead the way on seven points, three ahead of Chelsea after the Ukrainians beat the European champions 2-1 on Tuesday night.

Nordsjaelland coach Kasper Hjulmand was delighted with his team's result.

"That was a fantastic achievement but I think we can get even better," Hjulmand told TV 3Plus.

Midfielder Laudrup said: "We learnt from our two previous matches. We were smart when we had the ball and we also did the right things when we did not have it".

Juve keeper Gianluigi Buffon twice rescued his side in the first half in one-on-one situations with Joshua John.

The Italians, who have a three-point lead at the top of the table in Serie A, have now drawn a record nine successive matches in European competition.

The sequence contains three draws in the Champions League this season and six in the group stage of the 2010/11 Europa League.

"When you have as many chances as we did tonight it is always disappointing not to win," said Juve assistant coach Angelo Alessio.

"We deserved to win but when you do not manage to score with so many chances you have to accept the result."