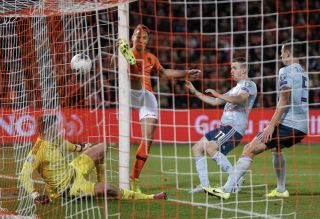 Northern Ireland suffered heartbreak in Rotterdam as Holland scored twice in stoppage time to snatch a 3-1 victory which leaves Euro 2020 qualification hopes hanging by a thread for Michael O’Neill’s men.

Josh Magennis’ 75th-minute header had Northern Ireland dreaming of a victory which would have ranked amongst their greatest results, but it all fell apart late on.

Memphis Depay levelled for the Dutch just five minutes after they fell behind, and then scored his second of the night in the fourth minute of stoppage time after setting up Luuk de Jong for the second.

It was brutally cruel on Northern Ireland, who had battled bravely for 90 minutes and looked like they would be rewarded with a point which kept them firmly in the conversation to reach next summer’s finals.

But instead they ended the night third in Group C, level on points with the Dutch and the Germans, who have both played a game less and who will both face Northern Ireland next month.