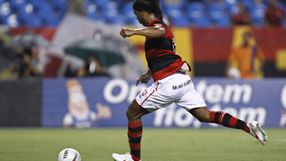 The referee needed police protection as he was surrounded by ranting Vasco players following the final whistle and club president Roberto Dinamite joined the protests at the end of the game in Rio de Janeiro.

Players scuffled with police and stewards who formed a ring around the referee, abandoning their protests after the beleaguered official had been led away.

"We were robbed and it always happens against Flamengo," said Vasco president Roberto, who was angry after Vasco had a penalty appeal turned down in the 78th minute.

Vasco coach Cristovao Borges said the official was to blame for the rowdy scenes.

"Normally I don't talk about the referee's performance. But when he makes repeated mistakes, the players, no matter how balanced and experienced that they are, lose their patience," he said.

Photographs showed broken plastic seats on the running track around the pitch at the Engenhao stadium. Media reports said around 70 seats were vandalised by Vasco fans.

The win in the second stage of the Carioca championship relieved the pressure on Ronaldinho and Flamengo after their shock Libertadores Cup defeat away to Ecuadorean side Emelec in midweek.

The team were ushered out of a side entrance at Rio de Janeiro airport on their return to Brazil after hearing that a group of fans planned to pelt them with eggs and popcorn.

Ronaldinho has been jeered in recent games and the former AC Milan and Barcelona player added to speculation that he could be on his way out of the club with his post-match comments.

"Ever since I arrived here, I've been treated with affection and that's how I intend to leave here, through the front door," he told reporters.