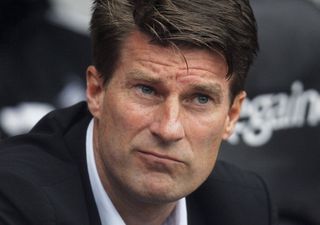 In his post-match press conference, Laudrup said he was 'definitely not pleased' with Swansea's performance in Romania despite the Welsh club having wrapped up a spot in the UEFA Europa League group stage.

Swansea advanced 6-3 on aggregate after a 5-1 first-leg demolition of Ploiesti but Laudrup was disappointed with his team's ability to convert scoring opportunities.

Ploiesti took the lead in the 73rd minute through Njongo Priso before substitute Roland Lamah equalised immediately but the hosts claimed victory on Thursday when Hamza Younes scored with seven minutes remaining.

While Swansea took just four shots for the match, with two on target, Laudrup was convinced his team could have scored before Belgian international Lamah cancelled out Ploiesti's opening goal but stopped short of blaming Northern Irish striker Rory Donnelly, who made his starting debut up front.

"We had some huge chances," Laudrup said.

"But if you don't score, then you won't win.

"We suffered a bit in the last 20 minutes and they got the first goal, then we had the red card (to captain Leon Britton) late on.

"But we wasted a lot of energy because we didn't score when we had the chance to.

"We have to be much sharper when we have possibilities but having said that I thought Rory did really well for us."

While Laudrup was happy to see Swansea reach the Europa League group stage, he warned his team he will work them hard to fix their wastefulness in the forward third.

"We are definitely not pleased with that," the 49-year-old Danish manager said.

"We are happy to go through and I thought we would after the first leg but once more we have seen what can happen if you don't take chances when you get them.

"We knew they would go out and press us because they had to in front of their own fans after a result like last week.

"They took a lot of risks and we knew we would have a lot of counter-attacks but we did not finish them.

"They were huge chances. It's fantastic to go through but we should have done better."