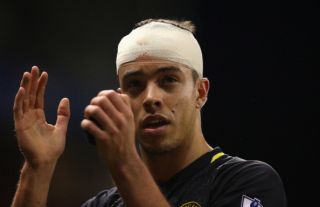 The 24-year-old striker is searching for a new club after being released at the end of his Wigan Athletic contract in May following a three-year spell at the DW Stadium.

The Premier League duo of West Brom and Swansea have been linked with the Argentina international, who scored five goals for Wigan last season.

Laudrup, though, has confirmed that he is not interested in the former Chelsea forward.

"We are looking for a striker with different characteristics," the Dane told the club's official website. "But no doubt we will be linked with a lot more over the coming weeks.''

Di Santo scored a total of 13 goals for Wigan and was an unused substitute in the club's shock FA Cup final win over Manchester City in May.