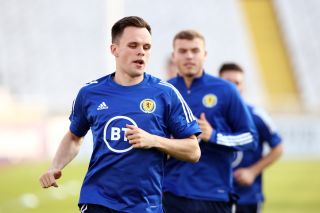 The 25-year-old Dundee United striker has not played since the 1-1 draw with St Johnstone on August 1 and missed the Premiership game against Kilmarnock on Saturday.

Scotland play Israel at Hampden on Friday before taking on the Czech Republic away three days later.

Before the match in Ayrshire, United assistant manager Stephen Frail told BBC Sportsound: “Shankland’s not ready, it’s not anything to do with the surface.

“He probably wouldn’t have been involved even if it were a home game.

“We have a couple of weeks now to get him ready for Rangers. With the game today and meeting up with the national team tomorrow, Steve Clarke will want his squad fit and ready to go.

“I would say it’ll just be too soon for Scotland. It’s a shame for everyone, first of all Lawrence.

“It’s the pinnacle of anyone’s career to play for their country.”