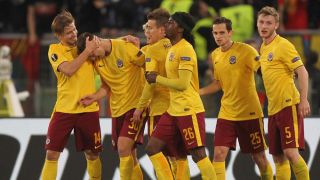 Sparta Prague surged into the quarter-finals of the Europa League as they produced a stunning first-half performance to beat Lazio 3-0 and claim a 4-1 aggregate success in the last 16.

Lazio appeared to have the edge in the tie after Marco Parolo netted an away goal in a 1-1 draw in the first leg in Prague last week.

However, Sparta all but ended the tie as a contest with a clinical showing that ensured their first win on Italian soil, having failed in their previous 11 attempts.

Borek Dockal's fierce 10th-minute strike broke the deadlock at the Stadio Olimpico before Ladislav Krejci – who had set up the opener – gave Lazio a mountain to climb with a composed finish.

Lukas Julis' volley on the stroke of half-time put the tie beyond doubt, allowing the Czech side to take their foot off the gas and soak up pressure in the second half.

Lazio unsurprisingly dominated play after the interval in their quest for a remarkable turnaround, but never looked like erasing Sparta's advantage as Zdenek Scasny's men eased into the last eight.

Antonio Candreva went close to opening the scoring for Lazio in the first minute when he pounced on an early defensive lapse from the visitors, only to see his low near-post drive kept out by David Bicik in the Sparta goal.

But Lazio then fell behind as they were punished for failing to clear their lines from a delivery into the box, Krejci knocking the ball back for Dockal to power home despite Federico Marchetti getting a hand to the shot.

Just two minutes later and it was Krejci supplying the finish as he coolly slotted into the bottom-left corner following good work down the right from Julis.

Needing three goals to turn the tie around, Lazio responded and saw Miroslav Klose hit over from a corner before Bicik denied Stefano Mauri after Candreva had broken free down the right.

Candreva had a low drive from long distance turned behind by Bicik, but Lazio were made to pay for not taking advantage of their period of dominance just before half-time.

Martin Frydek dug out a cross from the left-hand side, with Julis doing enough to hold off Milan Bisevac and hook the ball into the net on the volley, increasing the magnitude of the task facing Lazio.

Mauri was again thwarted by Bicik six minutes after the restart as Lazio sought a route back into the tie, with Klose then deflecting Candreva's long-range strike wide.

Lazio were unable to test Bicik again, their last prospect of silverware this season disappearing, while Sparta kept hopes of a first major European trophy intact.