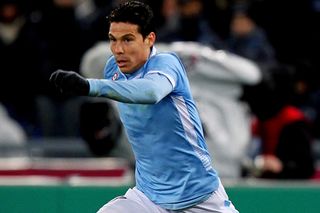 Hernanes did not play in his side's 1-0 Coppa Italia loss away to Napoli on Wednesday - left on the bench by Reja due to an injury problem - but the capital club's head coach does not believe he has seen the last of the 28-year-old in a Lazio shirt.

While Reja believes Lazio have a possible replacement in Felipe Anderson, the 68-year-old manager does not want to sell Hernanes.

"I know there are requests for Hernanes but as far as I know he is not for sale," Reja told Rai Sport.

"I've spoken to him, he is calm and relaxed. Does he want to leave? I don't know, you'd have to ask him and his agent but he isn't making a public show of anything.

"Felipe Anderson could in theory replace Hernanes, though he's more of a second striker than a midfielder.

"He's muscular and in my view more adept at playing in wide areas. He's Brazilian and likes to hold the ball, whereas in midfield you need to pass it quickly."

In his second stint in charge of Lazio, Reja had not suffered defeat with the capital club until they were eliminated from the Coppa Italia by Napoli.

Having resigned as Lazio's head coach in May 2012, Reja returned to Lazio on January 4 to replace Vladimir Petkovic and had led them on a five-game unbeaten run until Wednesday.

But with the likes of Hernanes, Antonio Candreva and Miroslav Klose unavailable, Reja remained pleased with his side's performance.

"We contained Napoli well in the first half and moved the ball around well. I am satisfied with the performance, especially with players like Brayan Perea and Felipe Anderson who are only 20 and were exhausted," Reja said.

"Unfortunately Hernanes and Antonio Candreva had these injury problems and it wasn't worth it to risk them, then we lost a few others during the game.

"We'll evaluate the fitness levels and discuss it with the medics, but they shouldn't be serious injuries.

"The forwards used up a lot of energy in the first half, they are inexperienced and have to mature. They can only learn by playing, so we wait for them to develop and help out the older players who need a rest.

"I am a bit annoyed, as seeing Napoli today they were perhaps within our reach ... so with a full strength team I think Lazio could've won tonight."