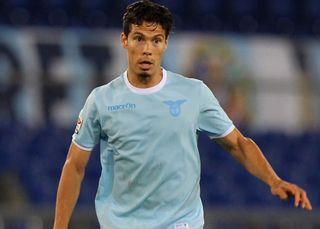 The Brazilian midfielder was linked with a move to the French capital during the close-season but Tare insists he is fully committed to Lazio and their Serie A campaign.

Lazio have had a mixed start to their league season, recording three wins from their seven matches, with Hernanes involved in six of them and scoring two goals.

The 28-year-old moved to Italy in 2010 from Sao Paulo and Tare expects him to stay at the club for a little longer.

"Despite his inconsistency, Hernanes remains a fundamental player for us," Tare told Corriere dello Sport. "You just have to think back to the goals he has scored.

"Every time that I have spoken to him or his agent, I have been given the impression that he sees this as his home.

"He knows what Lazio can give him, what he can have in Rome. It is vital for us that we can guarantee him an important team.

"You never know what will happen in life and one day he could move somewhere else, but that day is still a long way off."

Hernanes and Lazio return to league action on Sunday with a trip to Atalanta.