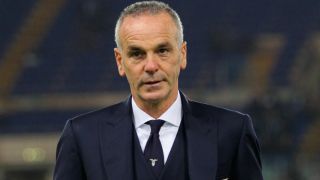 Lazio coach Stefano Pioli has warned his players that the Europa League last-16 tie with Sparta Prague is not over just yet as they prepare for Thursday's return at the Stadio Olimpico.

The Serie A outfit recorded an important 1-1 draw in Prague last week and are sitting in pole position to reach the quarter-finals.

Nevertheless, Pioli is adamant Sparta Prague should not be taken lightly and feels Lazio must be on top of their game in order to reach the next round.

"The second leg against Sparta Prague will be a difficult game, played at a very high pace," the Lazio coach told reporters.

"Sparta Prague are a tough opponent. We have to put in an intelligent performance. We have to play a good game, both at a technical and at a tactical level.

"We only have a small advantage after the first leg. We are only halfway through the tie. We have to be at our very best in order to get a good result and progress."

Lazio will be without a number of first-team regulars, though, as Dusan Basta (calf), Stefan de Vrij (knee) and Stefan Radu all remain unavailable, while Abdoulay Konko and Sergej Milinkovic-Savic are doubtful.

Pioli's men will draw confidence from the fact that they are one of four sides still unbeaten in the Europa League this season, yet Sparta have not lost in Europe this season either, with Liverpool and Shakhtar Donetsk the other two teams.

Sparta, however, have yet to win in 11 games in Italy and last reached the UEFA Cup quarter-finals in 1983-84, their best campaign in this competition.

Zdenek Scasny will have to make do without injured goalkeeper Marek Stech (unspecified), while Marek Matejovsky (ankle) is doubtful for Thursday's encounter.

Lazio have had the better of the sides' five European meetings (winning two, drawing two, losing one).