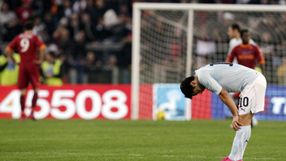 Lazio's first league defeat since the opening day meant second-placed AC Milan cut the gap to two points and leapfrogged champions Inter Milan with a 3-2 win at bottom side Bari.

Juventus and Napoli are just a point behind third-placed Inter, who drew 1-1 with Brescia at the San Siro on Saturday, following home victories over Cesena and Parma.

After narrowly surviving a relegation dogfight last term, modest Lazio have been revelations in Serie A but their 10th outing of the season ended in huge derby disappointment.

Roma, runners-up last season but inconsistent this term, were without suspended captain Francesco Totti but edged in front on 52 minutes after Stephan Lichtsteiner handled Simplicio's shot in the box.

Former Milan striker Borriello failed to get a clean contact on his spot-kick but Uruguay World Cup keeper Muslera managed to dive over the ball and let it wriggle through.

Unexplained empty seats at the Stadio Olimpico and an unusual lack of first-half passion were forgotten in an engaging second period, where both sides hit the post and furious Lazio midfielder Stefano Mauri had a penalty appeal rejected.

"We've been doing a bit better but hope this win gives us more of a push," Vucinic, whose side moved seventh, told Sky TV.

Unlike in previous years, only minor fan trouble was reported.

Milan made a quick start on Italy's heel when captain Massimo Ambrosini, returning after a month out injured, headed in fellow midfielder Clarence Seedorf's cross.

Coach Massimiliano Allegri again left Filippo Inzaghi on the bench despite his brace in the 2-2 Champions League draw with Real Madrid on Wednesday but made several changes with Ronaldinho and Alexandre Pato also substitutes.

Midfielder Mathieu Flamini, one of the fringe players brought in, increased Milan's lead on 30 minutes after Zlatan Ibrahimovic had been given far too much space to set him up.

Bari impressed in their first campaign back but second-season syndrome is beginning to strike despite Vitali Kutuzov and Paulo Barreto scoring either side of Pato's third.

The Rossoneri still have tactical issues to sort but Inter's shaky form and lengthy injury list, with defender Walter Samuel set to miss the rest of the season due to a knee problem, means Milan fans are starting to dream of a first scudetto since 2004.