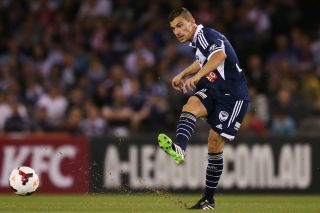 Sergio Cirio's penalty and Jeronimo Neumann's strike inside two first-half minutes had put United in charge at the break, but the visitors fought back.

The hosts opened the scoring with 23 minutes gone, goalkeeper Nathan Coe taking down Jeronimo, with Cirio converting from the resultant spot-kick.

They doubled their advantage two minutes later when Awer Mabil's shot came back off the post and fell kindly for Jeronimo to poke home his third goal of the campaign.

It was a different story after the break, though, as Victory stormed back through Finkler's assured finish on the turn.

And the comeback was completed in stoppage time when Troisi's powerful shot bounced down off the crossbar and over the line.