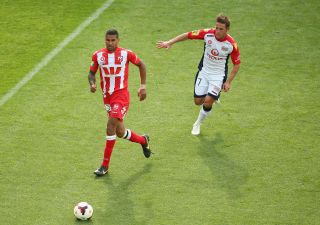 The game:
What a difference a win makes. Melbourne Heart stunned Newcastle Jets 3-1 last week to register their first victory of the 2013-14 A-League season and suddenly there is a spring in the step of the men in red and white. Then the club gets bought by Manchester City.

The potential of City's involvement is just about endless but Heart will have to wait for anything significant to change. Yaya Toure or Sergio Aguero are not flying to Adelaide as we speak, so Heart's hopes of knocking off Adelaide United on Saturday remain slim. The Reds are the most in-form team in the league.

Adelaide have not lost in six matches, winning four - including last week's 1-0 triumph over Western Sydney Wanderers - to move into fifth position on the A-League ladder. Despite having struggled with a long injury list through the busy Christmas/New Year period, Reds head coach Josep Gombau has steered Adelaide up the ladder with 10 goals scored in their past six matches, conceding just three.

The big issue:
Adelaide - Can the Reds produce a 90-minute performance? While Adelaide's results have been very impressive over the past month or so, Gombau's men have, arguably, ridden their luck slightly in their 2-2 draw with Sydney, 2-1 win away to Brisbane and 1-0 triumph over the Wanderers. Gombau will surely want Adelaide to flex their muscles against Heart at Coopers Stadium to further strengthen their credentials.

Heart - Marquee midfielder Orlando Engelaar claimed after last week's breakthrough win that Heart's central defensive duo of Patrick Gerhardt and Robbie Wielaert deserved credit for setting a strong foundation for the victory. Heart have conceded five goals in their past four matches, a significant improvement on earlier in the season. But can that continue against a flying Adelaide?

The game breaker:
Marcelo Carrusca - After missing the previous two fixtures with an adductor strain, Carrusca returned against the Wanderers on Sunday to score the winner in just the fourth minute, with a well-placed shot from the tightest of angles. It was Carrusca's eighth goal since he joined Adelaide before last season and while the 30-year-old Argentine playmaker has showed flashes of brilliance, he has yet to produce the consistency to rival the likes of Thomas Broich as one of the best imports in the A-League. With Adelaide reaching top form, however, Carrusca may be one of the biggest beneficiaries and could very well have a fantastic finish to the 2013-14 campaign.

Prediction: Adelaide 3-0 Heart
While claiming three points was the biggest highlight for Heart last week, the appearance of Engelaar off the bench was also a bright spot as the giant Dutchman completed the final half hour versus the Jets. Engelaar is expected to remain in Heart's squad for the trip to Adelaide with the former PSV Eindhoven midfielder claiming the Reds are 'very vulnerable when they don't have the ball'.

The issue for Heart will be that Adelaide are one of the best teams at keeping the ball this season with a passing accuracy of 81.7 per cent (fourth in the A-League). By contrast, Heart seem to throw away possession with a passing accuracy of just 76.1 per cent (ahead of only Newcastle). Heart are also the worst team in front of goal with a shot conversion rate of just 7.3 per cent, while Adelaide are second-best at 14.6 per cent.

Adelaide are likely to dominate possession and - unless Heart goalkeeper Andrew Redmayne has a blinder - should be good enough to knock the ball into the net at least a couple of times. In front of their home crowd, the Reds could be set for a big day.