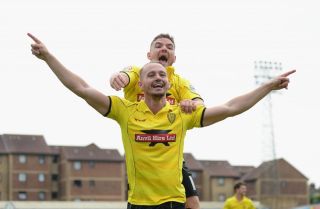 Harry Redknapp's men struggled throughout at the Pirelli Stadium on Wednesday the League Two side deservedly grabbing a winner with 13 minutes to play through Adam McGurk - last season's hero in Burton's run to the play-off final.

Burton coach Gary Rowett feared a QPR backlash following the Premier League's side 4-0 hammering at Tottenham on Sunday, but it never arrived.

The hosts generally looked superior in the first half and QPR had goalkeeper Brian Murphy to thank for keeping the score level.

Junior Hoilett fired a warning shot as he struck the crossbar in the first half, but QPR stuttered as they looked to build upon that opportunity.

Burton finally made their superiority tell in the 77th minute as McGurk converted a free-kick, earning the hosts a deserved spot in the third round of the competition for just a second time in their history.

Redknapp, who made 10 changes to his team, demanded a drastic improvement following the heavy 4-0 defeat to Tottenham on Sunday.

But his men almost found themselves trailing within three minutes, as McGurk fired just wide of the target after cleverly shooting on the turn from 25 yards.

QPR stirred but Burton continued to look far more threatening as they wasted another two chances with just under 20 minutes gone.

Dominic Knowles first tested Murphy from eight yards and then Alexander MacDonald agonisingly missed the mark after cutting in from the right.

Redknapp's side almost punished Burton's inability to score in the 22nd minute, but Hoilett's powerful drive came back off the crossbar, before skewing an effort over the bar after escaping his marker 18 yards out.

QPR failed to produce much of a response in the early stages of the second half, with Burton continuing to look more dangerous.

The home side forced another decent opportunity in the 55th minute, as QPR failed to clear a corner and, after a goalmouth scramble, half-time substitute Robbie Weir nodded over.

Burton then saw a half-hearted penalty claim go against them with 25 minutes to go, as Richard Dunne – the only QPR play to retain his place in the team – brought Knowles down in the area.

Rowett's men eventually grabbed a deserved lead in the 77th minute, though - McGurk stepped up to a 20-yard free-kick and sent an unstoppable effort flying past Murphy.

The visitors chased a late equaliser, with Jordon Mutch and Bobby Zamora both introduced by Redknapp, but the hosts ultimately held on comfortably to equal their best run in the competition to date.