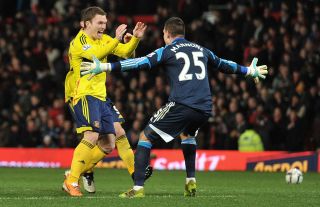 The rumoured United target saved Rafael's crucial penalty in a dismal shootout which saw just three players find the back of the net after the hosts had won an incredible second leg 2-1.

Jonny Evans put the hosts ahead in the 37th minute with a header from close range, but neither side could find the quality to breach either defence thereafter.

With away goals not coming into force until the end of extra time in the competition, United were required to hang on to their narrow lead for an additional 30 minutes, but looked to be out when David de Gea could only shovel Phil Bardsley's strike into the net.

In a frantic last two minutes, Javier Hernandez then sent the tie to penalties from close range, but with both teams short of quality from spot, Mannone made the vital save to book Sunderland a spot in their first League Cup final since 1985.

Moyes made five changes to the United side that lost the tie’s opener, with Darren Fletcher and Hernandez among the players to come in, the Mexican denied early on as his headed effort from an Adnan Januzaj free-kick was palmed away by Mannone.

With chances at a premium, Fabio Borini lashed a speculative half-volley over, while Darren Fletcher hit the post at the other end, before Danny Welbeck’s follow-up was cleared.

But Moyes’ men were ahead moments later, as two former Sunderland loanees combined to level the tie. Welbeck flicked the ball on from a corner from the right, teeing up Evans to head home from inside the six-yard box.

Rafael went agonisingly close to giving United an aggregate lead four minutes into the second half, hooking a left-footed strike just over the crossbar from the edge of the penalty area.

Januzaj was next to try his luck from distance, drilling just wide of the right-hand upright in the 55th minute, but both teams struggled to break down the opposition defence as the half progressed, with extra time looking an increasingly likely prospect.

Sunderland had cause to feel harshly done by in the closing stages of normal time when Chris Smalling escaped punishment for a tug on Steven Fletcher, before Marcos Alonso blazed narrowly wide of the right-hand post from a tight angle.

Bardsley looked to have sent Sunderland into the final when De Gea spilled his 20-yard effort into the net in the 119th minute, but Hernandez and Januzaj exchanged passes well before the former smashed home from close range to force penalties.

Adam Johnson appeared to have wasted Sunderland's chance to win as De Gea saved his effort from 12 yards, but Rafael saw the following spot-kick saved as Mannone earned victory for Sunderland, who now meet Manchester City at Wembley on March 2.