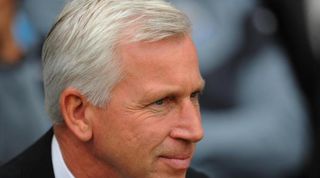 The Premier League side have been handed a favourable second round draw in the competition, with their opponents having won just one of their first four League One games.

Manager Pardew, however, is not planning to make wholesale changes as Newcastle continue their quest for a first major trophy since 1969.

When asked if he will ring the changes, the Newcastle boss replied: "One of the biggest disappointing games for me last year was Cardiff when we should have won in the FA Cup [third round] and we lost it in the last eight or nine minutes.

“That’s our last cup game so we need to react to that and we need to get a win so I’ll probably take the same 20 players that I took today [to Aston Villa] to Gillingham."

The Newcastle supporters craving silverware will certainly be pleased to hear Pardew speak so passionately about progressing, with the club have previously come under fire for not taking the cup competitions as seriously as the Premier League.

Pardew understands the reasons for that, yet insists the financial rewards available for remaining in the league means that will always remain the priority.

He added: "Perhaps, at board level, we say what other boards don't say in that the Premier League is the be all and end all because of the TV money, you cannot hide from that.

While Newcastle are set to have a strong squad at their disposal, they will again be missing some key players.

Papiss Cisse and Davide Santon continue to suffer with knee injuries and Cheick Tiote will also miss out due to a hamstring complaint.

Mapou Yanga-Mbiwa may recover from a knock which ruled him out at Villa Park, where Newcastle followed up a 2-0 loss to Manchester City last week by holding Paul Lambert's side to a goalless draw.

Mike Williamson will play no part due to suspension, having been sent off for two bookable offences against Villa.

The sides have met just once previously, Newcastle winning 2-1 in a 1976/77 League Cup clash.