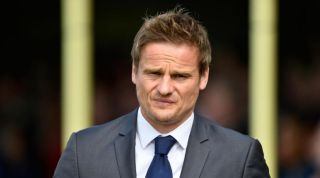 League Two AFC Wimbledon were formed when their League One opponents relocated from London to Milton Keynes in 2002.

It will be the second meeting between the two sides, with MK Dons coming out on top in a December 2012 FA Cup clash.

MK Dons started the season in emphatic fashion with a 4-2 comeback win at home to Gillingham on Saturday, while AFC Wimbledon shared the spoils in a 2-2 draw with Shrewsbury Town

Huddersfield Town begin life without Mark Robins with a trip to Chesterfield.

Robins parted company with Town after their 4-0 opening day defeat to Bournemouth - who travel to face League Two Exeter City - and Chesterfield will hold hopes of claiming a Championship scalp, having begun life back in League One with a 2-1 win over last season's beaten play-off finalists Leyton Orient.

Orient's Wembley conquerors from last May Rotherham United host League Two play-off final winners Fleetwood Town, while the 2013 finalists in the competition, Bradford City, are in another trans-Pennine clash as they make the trip to the Lancashire coast to face Morecambe.

There are all-Lancashire clashes between Bolton Wanderers and Bury and Rochdale and Preston North End, while York and Doncaster Rovers will contest Yorkshire bragging rights.

Leeds United will be dearly hoping to avoid any slip ups against Accrington Stanley after Dave Hockaday's unlikely reign as manager got off to a lacklustre start with a 2-0 loss at Millwall, who also entertain League Two opposition in the form of Wycombe Wanderers.

Cambridge United and Luton Town sealed their returns to the Football League last term and look to build on opening day wins with ties against Birmingham City and Swindon Town respectively.

Shrewsbury Town will have designs on a Championship scalp when crisis club Blackpool travel to Greenhous Meadow, while the latter's 2-0 weekend conquerors Nottingham Forest head to Merseyside to take on Tranmere Rovers.

Forest’s local rivals Derby County get the 2014-15 competition under way at Carlisle United on Monday night, while the two other teams that fell short in the Championship play-offs last season - Brighton and Wigan Athletic - face Cheltenham Town and Burton Albion respectively.

Ipswich Town and Watford are on the road at Crawley Town and Stevenage following impressive weekend showings in the second tier, with Middlesbrough and Cardiff City also travelling Oldham Athletic and Coventry City.