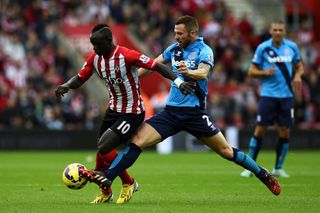 Southampton came out on top in the Premier League on Saturday, with Sadio Mane scoring the only goal of the game at St Mary's Stadium to take the hosts second.

It continued Stoke's inconsistent start to the campaign although Wednesday's League Cup tie offers Mark Hughes' side a chance to bounce back and gain a measure of revenge.

While Southampton bowed out of the competition at this stage last term, Stoke went one further to reach the quarter-finals before losing to Manchester United.

Eager for a similar run this term, Hughes will not make wholesale changes to his team for the visit of Ronald Koeman's high-flyers.

"We'll look to go strong. We want to progress," he said, with victories over Portsmouth and Sunderland helping Stoke to this stage.

"It's a competition we talked about a lot at the beginning of the season and if you look at the team's I've picked [in the League Cup] it shows I've given it the respect it deserves.

"So we'll be strong again. We may have to make changes because there were a few bumbs and bruises [on Saturday].

"I've got other guys that are chomping at the bit to be a part of what we're trying to do this year... so we'll have to look to see if we can give them an opportunity to impress on Wednesday."

While Hughes will hope a League Cup win can kickstart Stoke's campaign, which has blown hot and cold, for Koeman and Southampton the key will likely be maintaining momentum.

Sitting second in the Premier League with only two top-flight defeats, Koeman has made a flying start to life with the club after what lookd set to be a difficult campaign due to a mass exodus in the close-season.

With the former Feyenoord boss also keen to limit the number of changes he makes, midfielder Morgan Schneiderlin feels Southampton's recent encounter with Stoke will stand them in good stead.

"It's strange to play them again so quickly," the Frenchman told the club's official website.

"But it's a different competition, it’s a cup game and it’s different.

"But we know what to expect. We saw it in the second half and we need to expect that for the whole game on Wednesday. It’s never an easy place to go but I’m sure we will be ready."

Koeman has no fresh injury concerns although Hughes may be without Charlie Adam after the midfielder picked up a calf strain at the weekend.