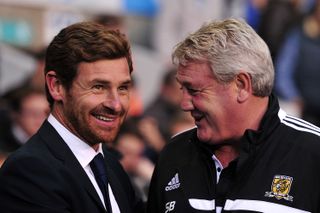 Andre Villas-Boas' charges secured a 1-0 triumph over Hull in Sunday's Premier League encounter, and Tottenham will once again welcome Steve Bruce's side to White Hart Lane on Wednesday.

The decision appeared a harsh one, with the Egyptian seemingly unintentionally using his arm to block Jan Vertonghen's cross.

Spain international Roberto Soldado duly converted the spot-kick - his third from 12 yards already this season - as Tottenham secured back-to-back top-flight victories, much to the chagrin of Bruce.

The fixture with Hull represents Tottenham's third match in the space of just seven days, meaning Villas-Boas could rotate his squad with the likes of close-season signing Erik Lamela coming into contention.

The former Roma midfielder has yet to start a Premier League game for the club, and Villas-Boas admits he is looking for the 21-year-old to stake his claim for a starting spot.

"With Erik it was a little bit more difficult but we have given him massive, massive help and his family arrived this week," he said.

"He knows he isn't producing half of what he can produce but he understands the situation now is that he has to compete for his place."

The game is likely to come too soon for Etienne Capoue, despite his return to training from an ankle injury, while Danny Rose is out with a similar problem, but Andros Townsend is not expected to be sidelined after he fell into a cameraman's pit in Sunday's fixture, injuring his wrist in the process.

In general Hull have been in good form upon their return to the top flight, with Bruce's side taking 11 points from nine matches, and they occupy 10th spot in the league.

But Sunday's reverse means they have gone three games without a Premier League victory, including losses in their last two matches.

Tottenham defeated Aston Villa in the previous stage, while Hull have seen off challenges from Leyton Orient and Huddersfield Town to make round four.