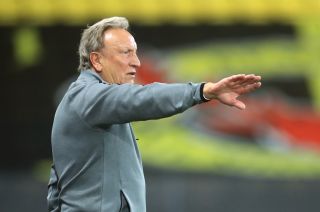 The League Managers Association has paid tribute to Neil Warnock who will take charge of his 1,500th game as a manager this weekend.

Middlesbrough boss Warnock will become only the seventh manager to reach the career landmark with British clubs on Saturday in his side’s home Sky Bet Championship game against Barnsley.

As Neil Warnock prepares for a milestone match in management, he says one against #Boro stands out…— Middlesbrough FC (@Boro) October 2, 2020

“He honed his skills in non-league, laying the foundations for a fantastic career in league football across all four divisions, including his unparalleled record of eight promotions in English football.

“(To reach) 1,500 matches in professional football management is a milestone which many aspire towards, but only a handful ever reach.

“Neil has not finished yet, but he can certainly look back and be incredibly proud of this achievement.”

Warnock began his managerial career in non-league football at Gainsborough Trinity and had spells at Burton and Scarborough before guiding the latter to promotion to the Football League in 1986.

“To surpass 1,500 matches, you must demonstrate resilience, grit and relentlessness as well as technical and tactical expertise in equal measure. Neil continues to exhibit all of these qualities and many more" 👏 #UTBhttps://t.co/mIdzfRPNvV— Middlesbrough FC (@Boro) October 2, 2020

He won back-to-back promotions to the top flight with Notts County and secured his fourth promotion with Huddersfield in 1995.

Warnock led Plymouth to the second tier the following season and also won promotions to the Premier League with hometown club Sheffield United, QPR and Cardiff.

“To surpass 1,500 matches, you must demonstrate resilience, grit and relentlessness as well as technical and tactical expertise in equal measure.”

To commemorate his achievement Warnock received a silver-plated Elizabethan dish.

Warnock said: “I know how important it is to surround yourself with people you trust, my friends Paul Evans, Mick Jones, Kevin Blackwell and Ronnie Jepson should all get a special mention.”

He added: “You can’t succeed without the people in the background, the coaching and medical team, club staff and chairman who have faith in you.

“The players are why I keep coming back to football. You can’t win them all, but I love the laughs I have on the training ground, they keep me young.

“A big thank you also to the fans, blimey we miss you. I’d like to think that along my journey to 1,500 matches I’ve given them some cracking memories.

“Finally, I’d like to thank my family, my incredible wife Sharon and my children, James, Natalie, Amy and Will. Their amazing support and honest opinions have kept me sane.

“It’s not over yet, I’ve got some new memories to make with the team here in Middlesbrough. I’m so grateful to have my life in football and for the support of the LMA along the way.”