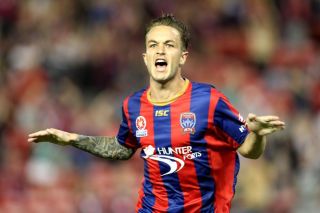 Joel Griffiths set the hosts on their way to victory when he opened the scoring 21 minutes in and Adam Taggart strengthened his grip on the Golden Boot by grabbing his 16th league goal of the season at the death, sealing the points in the last round of the regular season.

The win ensured Newcastle drew level with sixth-placed Sydney on 36 points and the Jets faithful will be hoping Perth Glory can spring a surprise against Frank Farina's men when they clash in Sydney on Sunday.

Even then the Jets need Sydney to lose by two goals or more to get through to the finals on goal difference.

Newcastle were made to work for their win over one of the form sides in the competition and if it does turn out to be their final game of the campaign, the victory was a fitting send-off for marquee striker Emile Heskey and retiring talisman Michael Bridges.

Striker Bridges could have scored after coming off the bench, but the former Sunderland man was denied by goalkeeper Eugene Galekovic.