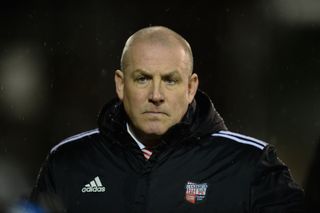 The Londoners are unbeaten since Mark Warburton replaced Uwe Rosler as manager in December and have won eight of their nine League One fixtures under the new boss.

That sensational run of form has seen them climb to the top of the division, where they hold a two-point advantage over second-placed Leyton Orient, who face a tricky tie at Rotherham United at the weekend.

The men from the New York Stadium currently occupy a spot in the play-off positions, but will have their eye on reducing the 12-point gap that exists between themselves and Orient.

Wolves appear to have finally put a run of poor results behind them to go on a three-match winning run and will feel confident of adding to that against Bradford City.

Phil Parkinson's charges have endured a disappointing couple of months and have not tasted victory since November 23. That triumph was their only win in 17 League One fixtures.

Elsewhere in the chase for play-off places, Preston North End will expect to pick up three points against Notts County at Deepdale, while Walsall visit Coventry City and Peterborough United host Colchester United.

At the other end of the table, Stevenage will be battling to boost their survival hopes as they visit mid-table Crawley Town.

League One's basement club are five points adrift of safety, but might fancy their chances against a Crawley outfit who have just three wins in 17 in all competitions.

Bristol City could haul Carlisle United back into the relegation picture as they welcome the Cumbrians to Ashton Gate, while Sheffield United could climb above Crewe Alexandra and out of the relegation zone when the sides meet this weekend.

Elsewhere, Swindon Town bid to climb closer to the play-offs as they take on Oldham Athletic, MK Dons look to recover from back-to-back defeats against Tranmere Rovers and Gillingham welcome Port Vale to Priestfield.