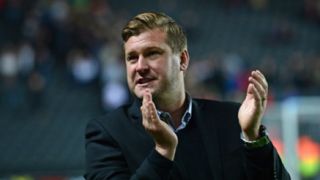 With the top two not in action due to the FA Cup fourth round, the Dons will look to halve their six-point disadvantage.

In fact, Karl Robinson's side can reach the summit if they prevail here and then beat Scunthorpe United for a game in hand next Tuesday.

"We're in a good position," said Robinson on the club website. "If we win the next two, we go top – although I'd rather go top in the last weekend in April!

"We do need to turn the screw now. It's going to be a big three to four weeks because during that period we play everybody. We have the players, staff and people around the place to really go and compete.

"I'm really proud of the players. They have been magnificent and there has been a togetherness that I haven't seen since I've been here. We're ready."

The formbook suggests Barnsley should be there for the taking, having lost their last four away games in this division at Chesterfield, Walsall, Preston North End and Doncaster Rovers.

Down at the other end of the table, Yeovil Town will hope to climb off the bottom by beating Coventry City at Huish Park, with the Glovers having bettered Bradford City 1-0 at home and drawn 1-1 at Preston in their last two matches.

The return to the club of striker Gozie Ugwu for a second spell has been the catalyst for their upturn in fortunes, with the 21-year-old forward scoring both those goals in his first couple of matches since arriving following a spell at Dunfermline in Scotland.

"Being a small group, we're having to play the same players week in and week out, but hopefully they'll be ready for Coventry because that's another big game for us," said manager Gary Johnson on YTTV.

"Two goals in two games from Gozie Ugwu is the X-factor we've been missing and they were well taken goals as well - proper striker's goals. It's good that he's hit the ground running as that's what we need."

Yeovil are now up to 24 points, level with Crawley Town, who visit Fleetwood Town on Saturday, and Colchester United, who entertain 20th-placed Leyton orient.

Crewe Alexandra are also in the drop zone following last week's 2-1 loss at Notts County but will look to get back on track with a positive result at local rivals Port Vale, having taken 10 points out of 12 in their four previous fixtures.