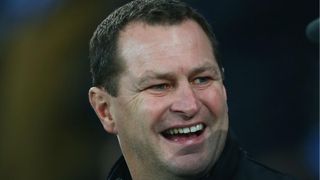 Colchester United kept their survival hopes in League One alive with two goals in a dramatic final six minutes to beat Fleetwood Town 3-2.

The battle to stay in the division will go down to the final weekend with six clubs still fighting to avoid the drop into League Two.

Trailing 2-1 with 84 minutes on the clock, Gavin Massey brought the strugglers level at Highbury, before Chris Porter's late penalty secured all three points.

Tony Humes' side were not the only ones to win at the bottom as Notts County and Crewe Alexandra leapt out of the danger zone.

Garry Thompson and Liam Noble struck the decisive goals for County in their 2-1 triumph over Doncaster Rovers, and Crewe ensured Coventry City remain in trouble with a 3-1 win at the Ricoh Arena.

Crawley Town slipped into the bottom four after a heart-breaking comeback from Peterborough United at London Road, Michael Bostwick and Conor Washington netting in the final three minutes to earn the hosts a 4-3 win.

Leyton Orient will need to win in their last game if they are to avoid relegation after drawing 1-1 with Sheffield United while already-relegated Yeovil Town suffered their 25th defeat of the season as they lost 2-1 to Port Vale.

Scunthorpe United survived a torrential downpour during the first half with Gillingham to earn a 2-1 win, three points that ensure their place in the division next season, albeit after a 27-minute delay due to the weather.

At the top, Preston North End and MK Dons will take their fight to join Bristol City – who beat Chesterfield 2-0 – in the automatic promotion places to the final day after both won on Saturday.