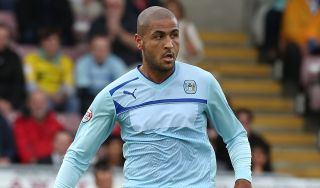 United went into the game with caretaker boss Chris Morgan in charge after David Weir was sacked on Friday following a dismal start to the season.

Attacker Callum Wilson doubled the advantage with a fine finish into the top corner just after the half-hour mark before Clarke seemingly put the game beyond all doubt with his second four minutes into the second half.

Substitute forward Lyle Taylor pulled one back with a free-kick after 62 minutes, but, although he narrowed the gap further with a deft header, the visitors were unable to complete the comeback.

United are now at the foot of the table by virtue of Tranmere's surprise 1-0 win at Bradford City.

The result marked Bradford's first home defeat of the season and ended a run of seven games without a win for Ronnie Moore's men.

Striker Ryan Lowe proved to be the hero for the visitors as he found the net 24 minutes into the second half.

Bradford responded well as they tried to preserve their unbeaten home record, winger Mark Yeates coming closest as he hit the crossbar.

Captain Gary Jones spurned an opportunity in injury-time as Tranmere held on for maximum points.