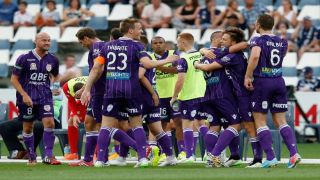 As the Asian Cup draws to a close, the A-League returns, with leaders Perth Glory to host third-placed Melbourne Victory on Sunday.

The competition took a short hiatus to allow the Asian Cup to shine, but as it hits the knockout stages, domestic football in Australia resumes.

Glory and Victory met earlier this month, with Perth claiming the spoils after winning 2-1 in oppressive heat at Simonds Stadium in Geelong.

Returning to their home ground at nib Stadium, Perth will be keen to extend their lead atop the A-League table.

Kenny Lowe's side are four points clear of both Wellington Phoenix, in second, and Victory.

And with the Phoenix not in action until next weekend, opportunity knocks for a Perth side who have won 10 of their 14 matches this season.

German winger Dragan Paljic could make his A-League debut for Perth in the fixture after arriving from Heracles Almelo earlier this month.

Paljic, 31, traded the Eredivisie for the A-League after advice from Socceroos left-back Jason Davidson, and is an injury replacement for Youssouf Hersi, who hurt his hamstring earlier this season.

Davidson played with Paljic at Heracles.

"I have heard many good things about Australian football, from my friend Jason Davidson and his father, Alan, who've only spoken positively about the league and the growth of the sport here," Paljic told Glory's official website.

"I have always looked at playing abroad and for me the A-League offers a tremendous opportunity and the challenge I thrive for.

"But most of all, I am here to play football and help the club win its first [A-League] championship.

"Perth is on a high and I want to help the team carry that momentum going forward and be part of history."

Paljic has also played for Hoffenheim and Kaiserslautern in Germany.

Victory are the league's joint-top scorers and although they will miss midfielder Mark Milligan - on national duty at the Asian Cup - boss Kevin Muscat can still rely on the likes of Besart Berisha, Gui Finkler and Archie Thompson.

Little has gone right for Newcastle Jets this season and Phil Stubbins' side, who sit second bottom, will be underdogs when they travel to Adelaide United on Saturday.

Adelaide - who won the inaugural FFA Cup this season - were 14 A-League games unbeaten at home before Brisbane Roar beat them in December.

And another loss at Coopers Stadium followed in December, as the Phoenix won 3-1 on New Year's Eve.

Josep Gombau's side will be keen to hit back on this occasion.

Both sides have flattered to deceive this season and could do with a morale-boosting three points to kickstart their campaign. The match will see former Mariners boss Graham Arnold return to Bluetongue Stadium with Sydney.