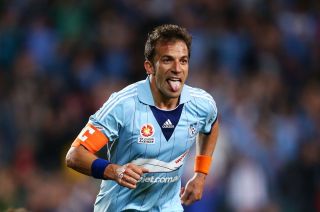 The club from the Harbour City have lost their past seven games away to Brisbane Roar, while Sydney last won at Suncorp Stadium in September 2007.

Although Sydney defeated Newcastle Jets 2-0 in the first round of the 2013/14 A-League season, the result has been tempered somewhat by the latter side's performance, which has been rated by many as the worst of opening weekend.

Alessandro Del Piero and Joel Chianese scored the goals against the Jets but Newcastle were so poor, doubts remain over how good Sydney actually are.

Saturday's match will see Sydney's head coach Farina return to Brisbane for just the second time since he was dumped by the Roar in 2009 for being caught drink-driving on his way to training.

Sydney have accumulated what looks to be a very strong squad but their form towards the end of pre-season was bad, as they lost their last five matches, and Brisbane are sure to test them as the Roar are considered genuine title contenders this season.

While Brisbane had to come from behind to overcome Wellington Phoenix 2-1 in round one, there was enough in the performance of Mike Mulvey's men to suggest the Roar could edge out Sydney in the only round two fixture to involve two winners from the opening weekend.

Ivan Franjic scored a winner in second-half stoppage time for the Roar, after he had also set up Brisbane's equaliser, which was scored by Besart Berisha just after half-time.

League leaders Adelaide United, who beat Perth Glory 3-1 in the opening round, will host arch-rivals Melbourne Victory on Friday in the other big clash of the upcoming weekend after the latter were held to a scoreless draw by Heart in the Melbourne derby last week.

Victory head coach Ange Postecoglou, who has been heavily linked with Australia's vacant coaching position this week, will be keen to see his team improve their cutting edge up front against Adelaide.

For Adelaide's head coach Josep Gombau, his focus will have been on finding replacements for Isaias and Nigel Boogaard, after both were sent off against Perth.

Osama Malik could replace either player but may be preferred in defence to cover for Boogaard's absence, while Steve Lustica could take up Isaias' deep midfield position and Jake Barker-Daish may come into the starting 11 in a more advanced role.

In the other A-League fixtures, Melbourne Heart will host reigning champions Central Coast Mariners, while the Jets will welcome the Glory to Newcastle and Wellington will travel to take on Western Sydney Wanderers.