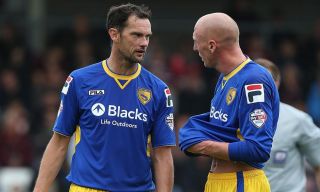 Jim Bentley's side are the league's surprise pacesetters so far, with a 1-0 victory over Oxford United on Tuesday continuing their 100 per cent start to the campaign.

A buoyant mood at the Globe Arena is likely to have been boosted further by the news this week that striker Jack Redshaw has decided to stay at the club, despite a fee being agreed with League One outfit Peterborough United.

Redshaw has scored 27 times for the club since arriving in January 2012, with boss Bentley under no illusions that other clubs could be tempted to make a move if the 23-year old continues his sparkling form.

Speaking after his team's win on Tuesday, Bentley said: "We're only pleased to have him back.

"He wanted to stay but I do think if he can keep turning in decent performances and getting on the scoresheet then there'll be one or two more [clubs] who come after him in the future. But I'm thankful to still have him."

The second-placed Burton Albion are the only other League Two team to have won all of their first three games.

Burton have recovered well from last year's play-off final heartbreak against Fleetwood Town and on Saturday, visit a Newport County side still looking for their first points of the campaign.

Rock-bottom Accrington Stanley are another side looking to get off the mark for the season, with preparations for their match at home to Luton Town suffering a bizarre setback, after boots and other items belonging to the players were stolen from the Store First Stadium.

There has been no such bad luck for fellow strugglers Hartlepool United, however, who could welcome back striker Charlie Wyke for their trip to AFC Wimbledon.

Wyke signed on for a second loan spell at Hartlepool on Thursday, joining on a one-month deal from Middlesbrough.

Oxford United, the only other team in the division without a point, host the in-form Portsmouth.

Elsewhere, Northampton Town welcome high-flying Shrewsbury Town, who preserved their unbeaten start to the season with an impressive 4-0 win over Accrington Stanley on Tuesday night.

Carlisle United's search for a win continues at home to Southend United, while York City will hope their midweek 2-2 comeback at home to Cambridge United will help inspire them to their first three-point haul at Exeter City.

Wycombe Wanderers will be eager to make a return to winning ways when they travel to Stevenage, having tasted their first defeat of the season at home to Tranmere Rovers, who battle Cheltenham Town.