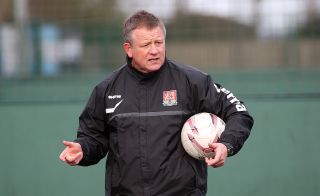 Wilder takes charge of Northampton for the first time at the weekend following his decision to leave promotion-hopefuls Oxford United in favour of moving to Sixfields.

And Northampton fans are hoping the arrival of Wilder can prove the catalyst for a change in fortunes as the side sit bottom of the Football League, six points adrift of safety.

At the opposite end of the table, leaders Chesterfield could do Northampton a favour by beating Bristol Rovers, who are four points above the relegation places.

Paul Cook's Chesterfield lead the way by one point, but the top seven are separated by just five points, so a third consecutive win could give the Derbyshire club some breathing space.

Chesterfield will fancy their chances against a Rovers side that have won just one game out of 14 on the road in the league this season - the worst record of any side in the division.

Failure to secure maximum points could allow second-placed Scunthorpe United to leapfrog the leaders with a win at Hartlepool.

And even though Scunthorpe are undefeated in 12 league games, Russ Wilcox's men will have to end a run of three consecutive draws, during which they have drawn a blank twice.

Graham Alexander's Fleetwood Town could also find themselves in top spot if they beat York City, who have failed to find the back of the net in their last three outings.

Rochdale will be confident of returning to the top three when Dagenham and Redbridge arrive at Spotland.

Keith Hill's men have won four of their last six in League Two and will be buoyed after coming back from two goals down in injury time to draw at Chesterfield in their last league game.

Burton Albion, who are level on points with Oxford, will hope to maintain their claim for an automatic promotion place by defeating an Exeter City side in a woeful run of league form - winning just two of the last 15 played.

Phil Brown's Southend United are the third side on 46 points and will look to keep up their recent form by defeating Newport County on Friday.

Torquay United take up the last relegation spot, but victory at Portsmouth could drag the men from Fratton Park into the relegation dogfight.

Bury will leapfrog Wycombe Wanderers in the battle for survival if they can beat their relegation rivals at Gigg Lane.