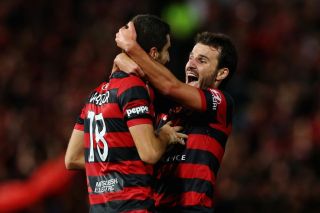 The Mariners got the better of Western Sydney in last season's final, but Tony Popovic's men gained revenge on Saturday and will now face either Brisbane Roar or Melbourne Victory next weekend.

Youssouf Hersi fired the Wanderers in front at Pirtek Stadium in the 31st minute and victory was sealed by a second goal from Iacopo La Rocca nine minutes from time.

Nikolai Topor-Stanley had hit the crossbar for the hosts prior to Hersi's opener, which saw the midfielder convert from close range after Brendon Santalab had driven the ball across the face of goal.

The Mariners pushed increasing numbers forward in the closing stages, but could not find an equaliser.

And La Rocca made the game safe with a cool finish after being released by Hersi.

Brisbane and Melbourne meet on Sunday to determine who Western Sydney will face in the final.