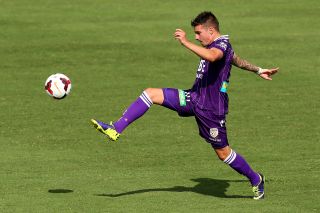 In a dominant first half in which they had 67 per cent of the possession and six shots to Heart's two, it took just five minutes of the second half for Jamie Maclaren to give Perth the lead.

After getting past Patrick Kisnorbo, Maclaren blasted his first shot into Andrew Redmayne's chest before he sent home the follow up.

A nervous looking Perth defence were just able to hold off Heart as they pressed for the late equaliser.

Golgol Mebrahtu almost levelled scores after 69 minutes when he just missed the chance to get on the end of an Andrea Migliorini cross, Perth goalkeeper Daniel Vukovic able to come out and avert the danger.

David Williams then forced a full-length save from Vukovic on the stroke of full-time to preserve the three points for Perth.

Wellington Phoenix and Newcastle Jets are still searching for their first wins of the season after they played out a 0-0 draw at McLean Park in Napier.

Both sides had their chances with Carlos Hernandez and Ruben Zadkovich hitting the woodwork and goalkeepers Glen Moss and Mark Birighitti also forced into making crucial saves.

The stalemate was just the third in 20 matches between the two sides and leaves them in the bottom half of the table after three rounds.

Of more concern for Jets coach Gary van Egmond will be the fact his team has yet to score a goal this term.