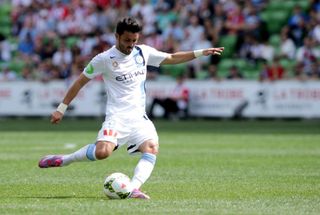 City looked set to suffer a surprise loss after conceding against the run of play to Edson Montano's second-half goal, having dominated possession at AAMI Park.

Marcos Flores sprayed the ball wide to Joel Griffiths, whose pinpoint delivery from the right flank was met at the near post by Montano, the Ecuador striker making no mistake from close range.

But a week after coming off the bench to level and earn a point away to Sydney FC, it was Spanish superstar Villa who City had to thank again, as the World Cup winner continues to live up to the lofty expectations that greeted his arrival in Australian football.

Damien Duff's driving run and delivery into the area saw Mate Dugandzic knock the ball down, Villa collecting it before driving a low finish beyond Mark Birighitti.

Substitute Jeronimo Neumann could have won it in the 94th minute for the Jets when he found himself free inside the area, only for the Argentine to scuff a rushed shot harmlessly wide of goal.

In the day's other game, Perth Glory moved to the top of the table after Andy Keogh scored a late winner in a 3-2 triumph over Brisbane Roar.

Keogh scored a brace and had a hand in the other to ensure Glory recorded their second win from as many games and kept the defending champions winless after the opening two rounds.

Mensur Kurtisi opened the scoring with a close-range finish before Keogh hauled the sides level from the penalty spot after being felled by Jade North.

Henrique edged Roar back in front when he was given too much space just outside the penalty area, allowing him plenty of time to send the ball screaming past a hapless Danny Vukovic into the top right corner.