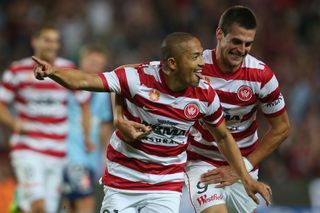 Last season's beaten play-off finalists dominated the derby at the Allianz Stadium from start to finish, with first-half goals from Iacopo La Rocca and Shinji Ono giving them a deserved first victory of the campaign.

Sydney FC lacked any craft and cutting edge up front with inspirational captain Alessandro Del Piero absent due to a calf injury.

And the Wanderers' Japanese playmaker Ono made the difference, as he first provided the cross for La Rocca's 11th-minute opener before then producing a moment of quality in front of goal 15 minutes later to seal the three points.

The former Feyenoord man outfoxed Sydney FC defenders Sebastian Ryall and Tiago Calvano before steering the beyond Vedran Janjetovic into the corner of the net.

Nikola Petkovic almost reduced the arrears for the hosts just after the half-hour with a superb free-kick that rattled the crossbar, but they failed to trouble Ante Covic throughout the rest of the game.

In Saturday's other game, reigning champions Central Coast Mariners also picked up their first win of the season with a nervy 1-0 home success over Adelaide United.

Nick Fitzgerald got the hosts off to a perfect start by breaking the deadlock after just two minutes, but Adelaide controlled vast swathes of the game only for their wastefulness in front of goal to cost them the opportunity to take something from the game in Gosford.

Adelaide striker Sergio Ciro was the visitors' main threat, but the Mariners held on to secure a win that moves them into joint second in the table with Western Sydney and Melbourne Victory.