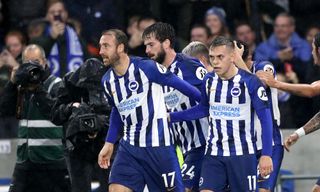 Brighton winger Leandro Trossard is desperate to make up for lost time after producing a match-winning contribution on his first appearance for almost two months.

Trossard’s positive start with Albion following a reported £15million summer move from Belgian champions Genk was curtailed by a groin problem suffered on international duty with Belgium in early September.

The 24-year-old returned with a bang during a 25-minute cameo in Saturday’s dramatic 3-2 win over Everton, delivering a teasing stoppage-time cross which prompted a decisive own goal from Toffees defender Lucas Digne.

“It’s been a difficult time with the injury, it’s the worst feeling as a player when you’re watching from the stands,” Trossard told Albion’s website.

“But you have to work hard to get back as soon as possible, and I’m delighted to be back on the field and helping the team.

“I feel good and I was quick to get back on the grass when I suffered the injury, so my rehab process was good.

“I want to start games now, as any player does, and both me and the team have a lot to build on.”

Trossard watched from the bench as an unused substitute when Brighton conceded a late equaliser during the agonising 2-1 loss at Aston Villa last Saturday.

The Seagulls were on the right end of injury-time joy this weekend after Digne’s mistake followed Neal Maupay’s controversial penalty to overturn a 2-1 deficit and earn three points.

Trossard was delighted to help reverse Albion’s fortunes and is enjoying his football under manager Graham Potter.

“Last week it was a really difficult feeling to concede so late, which makes it feel even better to finally get those three points,” he said

“We had a great mentality to turn it in our favour.

“We have a nice style of play that the head coach is asking us to do – we create a lot of chances and that suits my game very well, hopefully we can continue to do this for the rest of the season.”

Everton were the better team on the south coast and looked set to record a first away win since March after an Adam Webster own goal and a strike from substitute Dominic Calvert-Lewin saw them recover from Pascal Gross’ early opener.

But, after being on the end of the first top-flight penalty awarded by VAR following Michael Keane’s challenge on Aaron Connolly, the struggling Toffees have now lost five of their last six league games.

Manager Marco Silva admitted the late drama was a major blow for his side.

“It is our obligation (to lift the players) and I already gave my first feedback,” he told evertonfc.com.

“The mood is really low. It is difficult when we put in a big effort and did everything we should – and scored twice.

“Many things are going against us. But together, fighting and improving, we will achieve the results we want.”